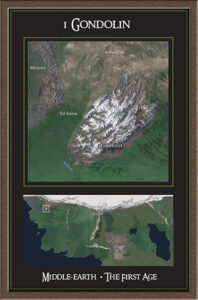 It’s been quite a ride to get this far, but I’m very pleased to announce that I’ve started minting The First Age NFTs at OpenSea.

I’ve started with a couple of NFTs based on the first image in the series, which is also one of the nicest. The Gondolin image not only has the Crissaegrim mountain range with the Hidden City at its heart, but it also has the narrow valley where the Sirion runs from its source in the Ered Wethrin.

The valley contains Tol Sirion, where the Noldor tower of Minas Tirith was built (not to be confused with the city in Gondor). The tower (and its dungeons) is the scene for one of the most dramatic scenes in the Silmarillion.